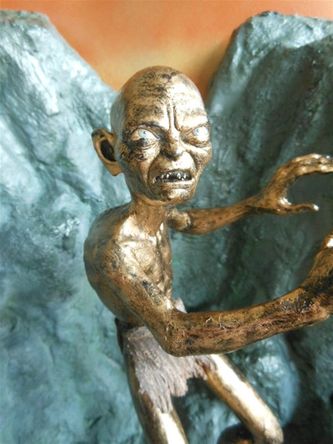 Here is a little diorama I put together featuring the Gollum character from 'The Lord Of The Rings' films as portrayed by Andy Serkis. It is supposed to represent the scene in the film 'Return Of The King' where the two Hobbits (Sam and Frodo) and Gollum are climbing up the mountain side prior to their falling out due to Gollum's subterfuge.

The ¼ scale Gollum figure is from Reel Toys (a division of NECA Inc.) and stands roughly 11 inches tall and is very nicely articulated. Though I chose to bronze this figure as I did with a King Kong figure a while ago, the creature's original coloring is very good and the joints well hidden all things considered. I used two part epoxies (clay & adhesive) to hide the numerous joints to present a statue version.

The multimedia base is primarily florist's foam, plaster cloth, Liquitex (see my Hints & Tips page for a brief description of this product) and acrylic and oil based paints.

For the bronze effect on Gollum, I used Rub'n'Buff's Antique Gold coloring followed by a few washes of black 'stain' by mixing India ink with a 50/50 mix of water and rubbing alcohol.

The title card is written in Elfin text based on a site I happened to find on Google after doing an English to Hobbit Rune generator search. Here's the link if you're interested: (http://derhobbit-film.de/rune_generator.shtml)

The build was fairly straight forward with most of my time spent on waiting for things to dry. The final size comes to 12” wide by 15” high by 10” deep. SOLD! 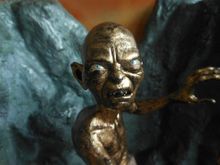 A close-up of the Gollum figure showing the bronzed effect I used as described in the text above. 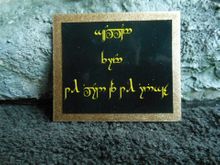 Here is a close up of the diorama's title card. It says "Gollum from The Lord Of The Rings" in elfin script. There is a link in the text to get you to the Hobbit & elfin text generator that I used. 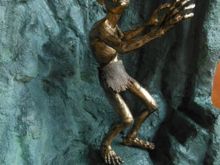 Here is a full frontal shot showing the whole scene with the title card. Click on the photo once to see the whole picture enlarged without any truncation.