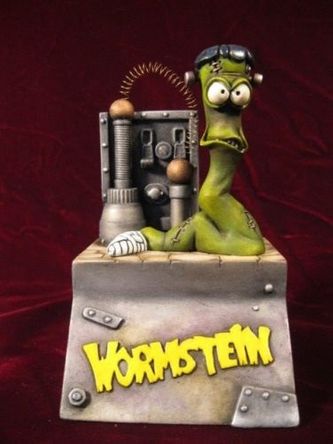 The 'box art' for this kit

Here's a cute little kit I recently acquired featuring a re-animated annelid called 'Wormstien'. The sculpt is by JR Crinon who has a number of whimsical and grotesque resin creature kits on eBay and also at his web page (http://www.theexo.com/crinon/gal_orig.html).

This inexpensive kit was a fairly simple affair comprised of three resin parts and a short strand of stiff wire to make the electrode that stretches between the mad lab lights (see photos).

There was very little clean up involved although I had to fill a few voids with modeling paste but nothing too objectionable. Where painting this kit was the most time consuming, assembly took me but minutes so this can be a nice “quicky” project or a nice kit to start out on as a beginner.

As is my ilk, I decided to light this kit which was a fairly straightforward affair. I recast the rear “mad lab” detail in clear resin and then drilled out the two globe lights from the back. I installed a pair of flickering LEDs that I took from a pair of tea lights I purchased at the Dollar Store for two bucks. I gave one a clear blue coat to suggest an electric arc and left the other alone. The power supply is a 9 volt battery mounted in a holder that had an on/off switch built in.

Because the battery pack was a tad bulkie and I didn't want to hollow out the base to accommodate it (very time consuming & messy), I decide to make a stone wall backdrop to hide the assembly. I snagged a piece of plastic sheet from my scrap box and, after cutting it to size, I scribbed it with a dull Xacto blade to create mortar lines.

Next, I wrapped the stiff wire around a toothpick to create a tight spiral and, after drilling out wire sized holes in the top of each of the globe lights, I put the coil in place to look like an electrode of some kind stretched between.

To finish, I attached the rear wall to the base with screws & 5 minute epoxy and then drilled out holes to match the LED placement in the mad lab apparatus. I soldered everything off line to avoid melting anything and then secured all the electronics in place with either epoxy or screws (see photo).

And there you have it. I really enjoyed this little kit for providing me with a break from my more complex projects and I'm sure I'll be purchasing more of them in the future. 10/20/18 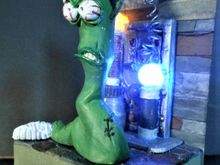 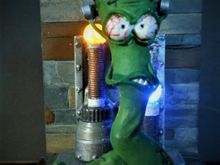 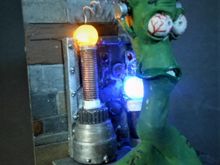 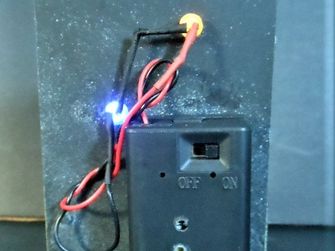 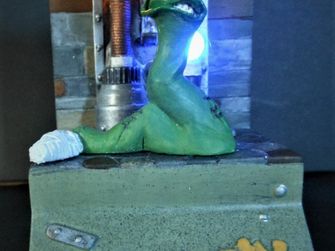 Straight on shot of the little guy which stands about 5" with my background. Click once for a larger view.