Apollo 18: Why We Didn't Go Back - A Conspiracy Theory 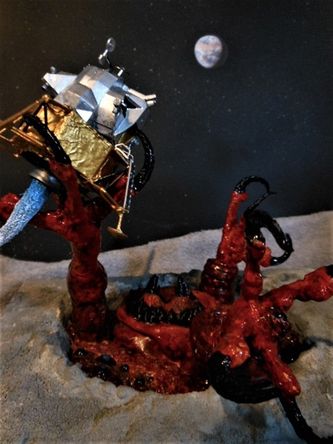 At this writing, the 50th anniversary for man landing on the moon in 1969 has just passed us by. I was nineteen at the time and I can remember gathering around a small black and white TV set with my buddies, each of us holding our collective breaths as Neil Armstrong stepped out on the moon's dusty surface.

As is our condition (and a sad one it is), subsequent landings garnered less interest because of the American public's short attention span until the Apollo program as a whole was finally abandoned in 1972 with Apollo 17.

Sick puppy that I am, I thought of the “real” reason for the cancellation of the program, namely the disastrous flight of Apollo 18, images of which are presented here. 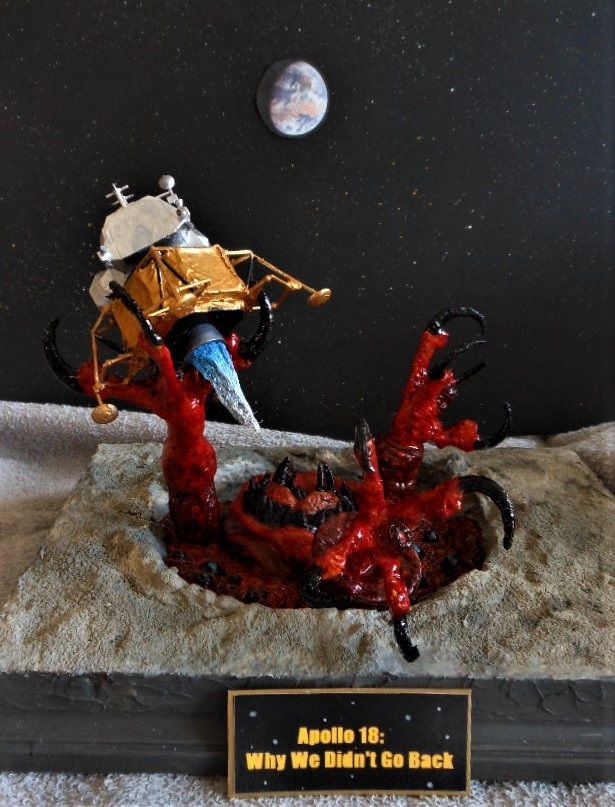 Aside from the lunar module (a 1/100 scale plastic kit from Heller), the scene is designed by yours truly. The base is is a 11 ½ “ x 8 ½” wooden plaque which is my 'go to' standard for small scenes like this. I capped it with a one inch thick piece of pink foam insulation (glued in place with carpenter's glue) into which I carved a roughly circular hole to represent a crater. I built up the rim's edges and irregular surface with Sculpta-Mold modeling compound. Once this cured, I dusted the entire PREWET surface with plaster of Paris using a kitchen strainer and then misted the whole surface again with water from a spray bottle to make the plaster adhere to the surface, trying to not over do it so that the plaster still looked dry. Once the surface was completely cured & dry (about 24 hours), I gave it several washes of very light gray acrylic paint until I got a tint I was happy with. Referencing photos of the Moon's surface on Goggle proved to be helpful during this step.

Next was deciding what was my moon beast gonna look like? I initially was going to go with spiked tentacles but that seemed kinda “ho hum” to me so did a Google search (ya gotta love it!) on 'monster images'. 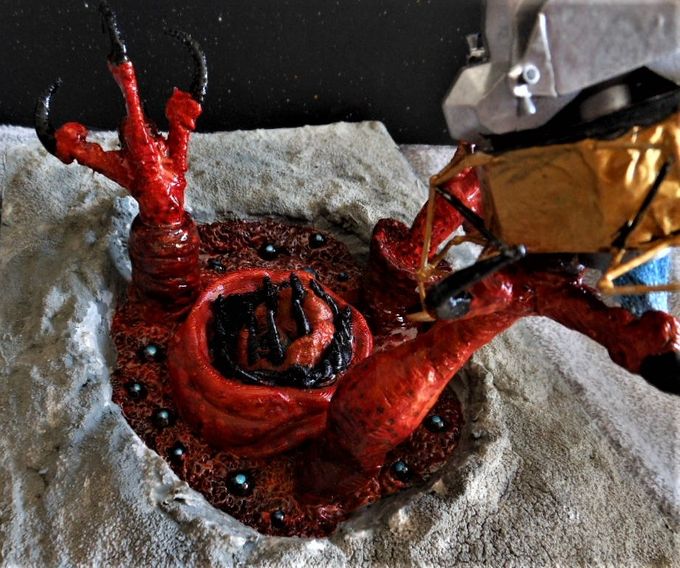 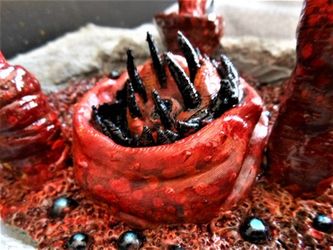 Anyway, my imagination whetted, I decided on some kind of grasping claws emerging for a bubbling pool of eyes. Not being much of a sculptor, I went on Thingiverse.com to see if there might be something close to what I wanted that I could run on my 3D printer and I have to say, Thingiverse hasn't failed me yet. I found some heron claws along with a lamprey-like mouth that filled the bill perfectly.

I downloaded the 3D printer files and after resizing the objects to a scale that was in line with what I was making, I ran off three claws and half a dozen mouths of various sizes for this and future projects.

Because PLA (this is the plastic that is generally run on a 3D printer) can be somewhat malleable when heat is applied, I distorted the finished claws to give them a more threatening appearance. I also gave them a outer sheath that would retract as they extended from the pit.

I decided to go with a mouth within a mouth look for the mostly unseen creature so I nested three of the mouths in a bed of eyes. The eyes where ball bearings of varying sizes that I painted glossy black and accented with pupils of iridescent blue. I made a ropy bed from two part resin clay in which I placed the central mouth surrounded by the three claws and multiple eyes. 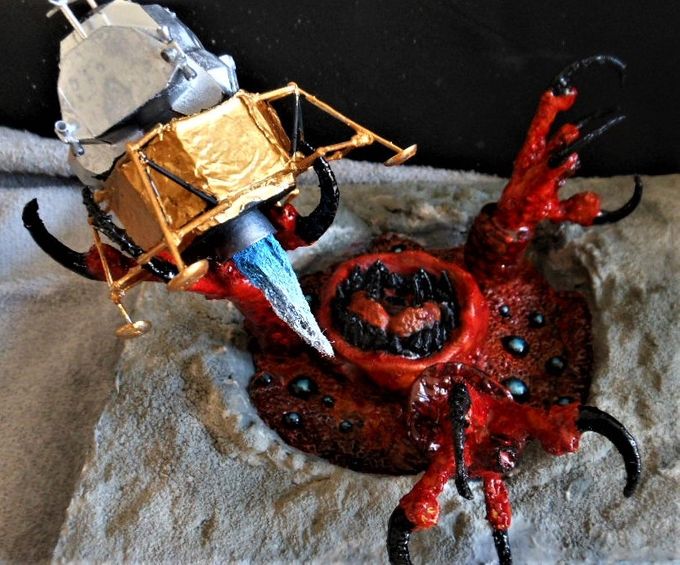 The paint scheme started with orange on the upper parts of the claws and mouth and blended into dark green with a piebald effect at the transition. I then went with a gloss black for the talons with a final wash of clear red for the rest of the creature.

The lunar lander was assembled and painted based on the instructions although I added aluminum foil painted gold to simulate the outer covering of the real lander. The jet exhaust it fine steel wool painted white and then dusted with a transparent blue at the nozzle discharge.

The starry background is a large sheet of black foam board I spattered with white and yellow paint from an old toothbrush for the star field effect. The Earth image was a download from Google that I printed out and tacky glued to the back ground so it would be removable at a later date if I so desired.

Though fairly simple, this build took bit longer than it should because I was jumping back and forth between a couple other builds. I fairly pleased with how it came out though I may change the color scheme on the monster at a later date. 9/20/19