The Quatermas Xperiment aka The Creeping Unknown 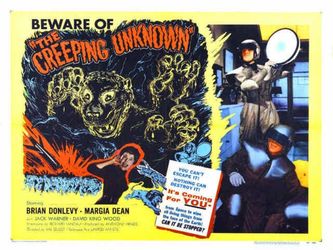 The poster for the US version of this film. Note that the odd looking creature depicted is nowhere to be seen in the movie.

I have watched hundreds on science fiction films in my life and I have always felt that the British approach to the story was much darker and mature than those of other countries, especially the US. Science fiction films from the United States seemed a bit goofier to me (and there are exceptions of course), particularly those of the so-called Golden Era of the 1950's since they were aimed primarily a at the US teen age market.

The Brits on the other hand didn't seem adverse to applying the “hard science” aspect to their stories since they seemed to be focusing on an older and more knowledgeable audience. “The Creeping Unknown” in the US or “The Quatermas Xperiment” as it is know in Britain is such a film. (Note: The dropped letter E in the British title may have been to draw attention to the film goer that this was a “X” rated film which indicated it was meant for adults although nothing of a pornographic nature.)

Released in 1955, it tells the story of a doomed British rocket ship with a trio of astronauts that crashes not long after being launched, with two of the astronauts being reduced to a small lump of jelly in their spacesuits and the third in a somewhat disfigured and catatonic state.

The story climax's with the third astronaut, having mutated into a horrendous blob impacted by the things it has consumed, being electrocuted on some scaffolding inside Westminster Abbey moments before it can release any spores of similar creatures. Though there are only four human casualties and an unknown number of animals in the London zoo off scene, the film advances at creepy albeit slow pace which may be off putting to some viewers. 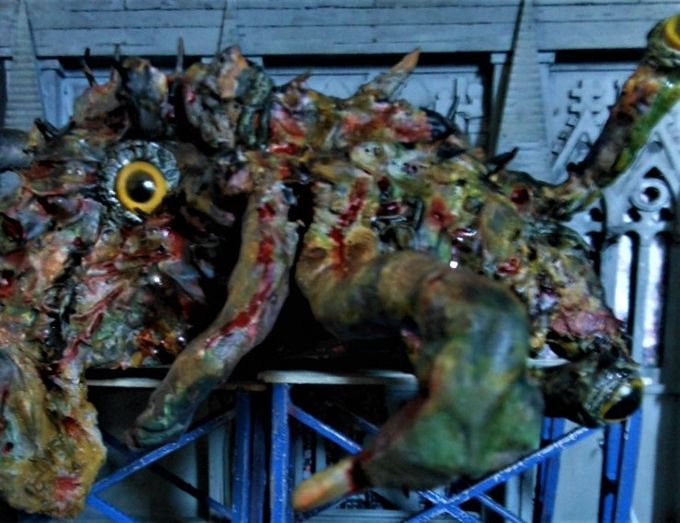 As far as I know, “The Creeping Unknown” is the first 'blob' type of monster in cinema beating out “The Blob” USA release (1958) and Mexico's “Caltiki, The Immortal Monster” (1959). I suspect the later films got their idea from TCU.

The diorama, as the accompanying photos show, is my interpretation of the Westminster Abby scene at the film's conclusion. A great deal of it was made using several different recipes on my 3D printer. The backdrop section is an amalgam of a section of Notre Dame cathedral, bricked up portals on the lower section, some wood strips to hide seams and stained glass windows off my regular ink jet on paper. The scaffolding is 3D printed along with real wood strips for the platforms. The TV camera is 3D printed whereas the stool the cameraman is sitting on is hand made. The figures are G scale which I altered by making them look up at the monster as they become aware of it.

The creature has a foam board core to save on the more costly materials. The various appendages were made of aluminum wire armatures covered with two part epoxy clay which I sculpted to make an amorphic nightmare with spines and tentacled eyes. The monster's coloration is based somewhat on photographs of sea cucumbers (that's a real thing BTW) that I found on Google. 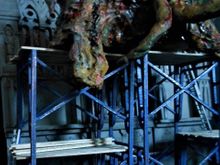 Left side close up. Click for a larger image. 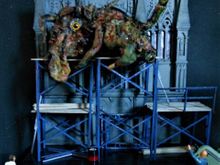 Center long shot showing the creature in all its glory soon to be electrocuted. Click for a larger image. 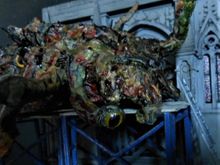 Right side detail shot. Click for a larger image. 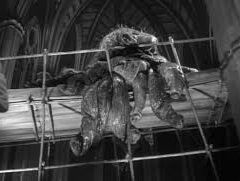 Screenshot of the monster from the film. Click for a larger image. 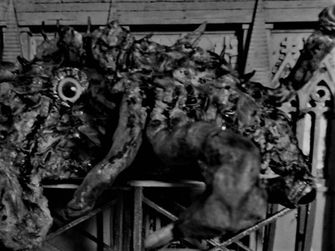 My somewhat bulkier version in B & W. Click for a larger image. 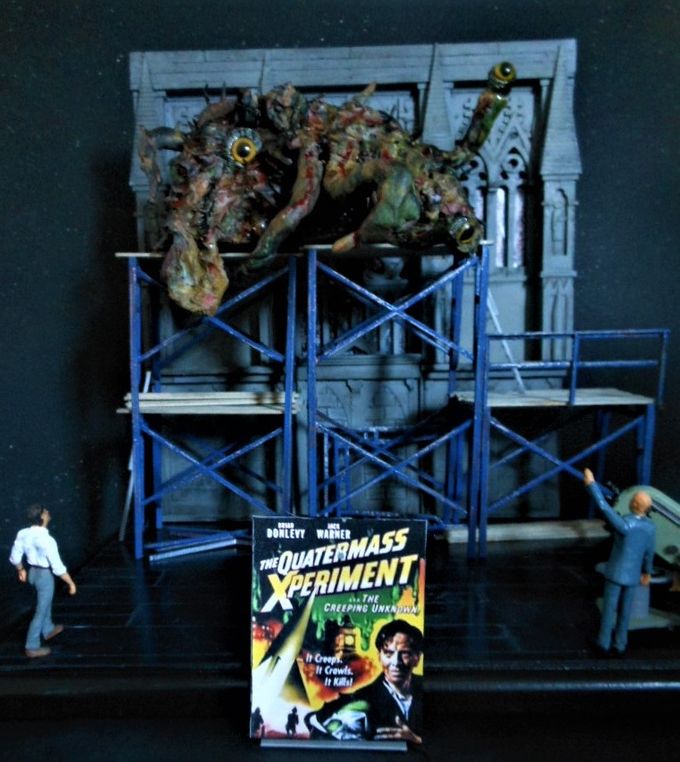 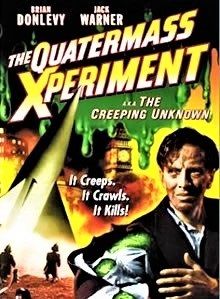 The DVD art for this film. Note that both the British and American titles are shown to avoid (or make) confusion.