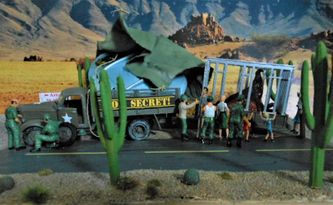 Panoramic view of this build. Click for a larger image.

Here's a little diorama I made in a more whimsical vein than those I have made in the past though I can't say that the idea is totally mine. I saw something like it at a Rhode Island Modelers Association show in 2017 and it has been in the back of my mind ever since. Though similar in set up, I think my build is different enough to be called mine.

The scene is essentially 1/32 scale though a few items are a bit off scale but not too objectionable. The driving force is the army truck that I picked up on eBay. The markings were originally foreign (I don't recall where) so I base coated the vehicle with flat gray primer and came back with olive drab paint and star decals to resemble US Army markings. I filed down the front tire to look like a flat, hence the original cause of the disruption. I printed up some TOP SECRET! wooden placards using a stencil style font in yellow which I mounted on the sides of the bed.

The saucer is a Vic Torry (a comic book hero from the 50's) Flying Saucer model kit from Atlantis Models. The plastic kit was cast in a gawd awful yellow which matched the comic version color scheme. I went with a more traditional metal finish by spray painting the model a flat aluminum followed by a metallic blue wash. I added some copper detailing after making a ragged through and through hole to suggest it got shot down by the military. 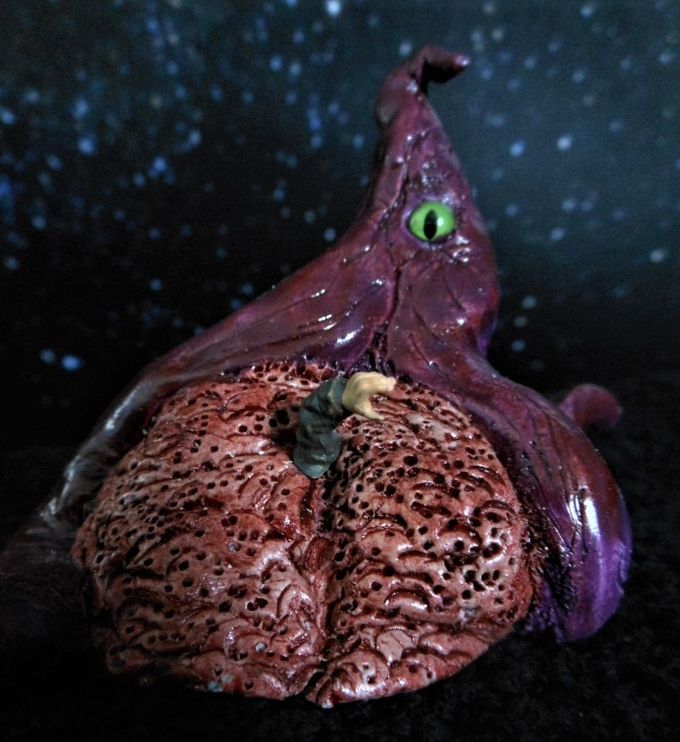 What all the excitement was about.

The tarpaulin which has blown off at a most inconvenient time was made of regular cloth. I painted it in an olive drab and then draped it over the saucer before the paint hardened to take the form of the saucer. I had wrapped the saucer in plastic wrap so the olive drab paint wouldn't mar the saucer's silver finish. For the rope tied downs, I unraveled some string and stiffened the strands with khaki paint which I tied here and there on the side bars and tarp to look like they had broken free thus revealing the saucer.

The trailer is scratch built using a few parts from my junk box. The bed is made from wooden strips and I made resin castings of the truck's tire so they would match. The cage is 3D printed from a downloaded recipe which I altered to allow the completed assembly fit inside the trailer's bed.

The alien is something I kinda just threw together without any forethought though it began to evolve into something based on a novelty song from 1958 called “The Purple People Eater” (yes, those times were simpler then or at least seemed to be). Since the whole scene is based in the 1950's time frame, it was a perfect fit. If you look closely, you can see the arm of its latest meal extending from its mouth. I have a brief video below with a snippet from the song.

The crowd is primarily made up of a mix of G figures and 1/35 scale US Army men trying to deal with the situation without letting it get anymore out of control than it already has.

Left side of the scene showing the cause of all the trouble...a flat tire. Click for a larger image. 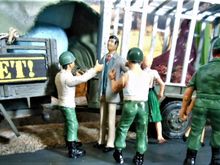 Center shot of the mayhem showing two soldiers arguing with a civilian. Click for a larger image. 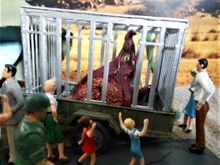 Right side view showing the captive alien. No one seems to notice it has a human arm dangling from its mouth. Click for a larger image.

The base is a 10” x 13” wooden plaque which is my “go to” display choice in most cases. I gave it some contours with a few layers of plaster cloth on either side to resemble a wind swept desert with an asphalt road running down the middle. After the plaster cured, I glued real beach sand to the base with a watered down mixture of white glue. I painted the road with a very dark gray and made the yellow traffic striping with 1/8” masking tape which I had painted an off yellow color. The cactus plants were 3D printed and the other foliage came from my plant stash.

The finishing touch was a weathered “Area 51” sign in the left rear in keeping with the conspiracy theory theme of the scene. I had fun building this diorama which kept evolving and getting more complicated during its construction. 4/4/20 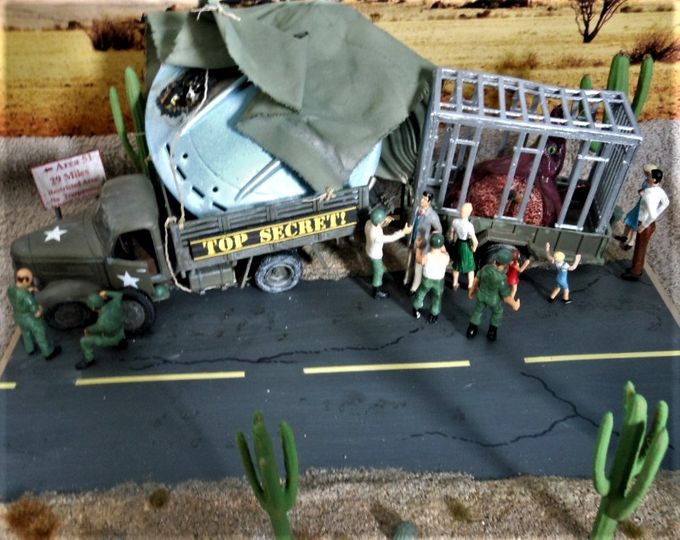 A god's eye view of the scene. Click for a larger image.

A brief video showing the creature with a short sound bite of the 1958 song that inspired it "The Purple People Eater"" sung by Sheb Whooly.