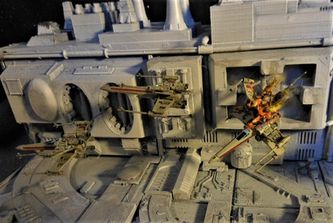 I first saw Star Wars before it became “A New Hope” at a Saturday night eight pm showing at the Brockton Cinema in 1977. When the film ended and the applause subsided (something I hadn't heard in a theater since I was ten), I called my soon to be wife to meet me at the theater to see the midnight show, and, “No, you can sleep later! You have to see this film!” Needless to say, this film made a tremendous impact on me almost as much as “The Seventh Voyage Of Sinbad” did when this eight year old first saw it in 1958.

Though packed with dozens of memorable scenes, I think the most effective of them all was the so-called “Trench Run” sequence at the conclusion of the film. I can still feel the vertigo I got during the point of view shot when you are plunging down into the Death Star's trench only to pull up and soar down metal canyon. I recall myself (along with everyone else in the theater) swaying side to side as the approach was made, laughing nervously as the towering gray walls streamed by.

This diorama is an attempt to capture some of the excitement that that sequence held for me. It has been on the back burner of my brain for roughly six years when I stumbled upon resin cast tiles for sale on eBay that modeled the surface detail of the Death Star. There were six or eight different tiles that one could literally make infinite configurations. Unfortunately, finding X-Wing and TIE fighters the proper scale was a limiting factor in my moving forward with this project. 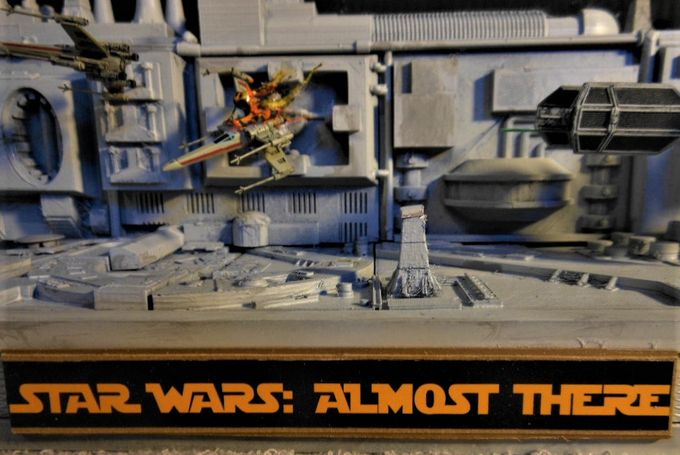 Enter the 3D printer. I have had one in my possession for about five years now and I consider it an invaluable tool in any serious modeler's workshop. I can't begin to list the number of times that my printer has provided solutions to a myriad of problems I've encountered in this hobby.

Anyway, as some of you may know, the 3D printer runs on recipes that generate the object in question. The really NEAT part is that you can alter the dimensions of the object to fit your needs. In this case, I had discovered some real nice Star Wars spaceships in the form of gaming pieces, specifically the “Star Wars X-Wing Miniature Game” by Jay Little. The ships are about an 1 1/4” long (roughly Z scale) but the detail is exquisite. I purchased the game for the three fighters (there are two TIE and one X-Wing) and I got two more X-Wings and Darth Vader's TIE fighter separately.

Since the scale of the fighters was the driving factor in how large the diorama would be, I now could download and print out the Death Star tiles to fit the scene. I ended up making the tiles about 25% smaller which made a scene a tad over 16 inches wide by eight inches deep.

For the sub-base I found a piece of L shaped Styrofoam packaging to give me a cut away view of the trench. I ended up printing twelve different tiles for the scene, the size of which I could adjust to fit by using the 3D printer's slicing program.

This was a fairly simple build albeit a time consuming one. Each tile, depending on its complexity, took about six to seven hours or so to print. I wasn't idle during the printing process since I could work on other projects which I did. 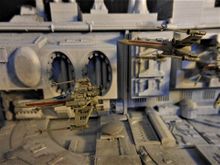 Left side detail shot. Click for a larger image. 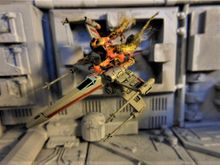 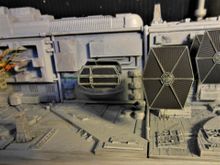 Right side detail shot. Click for a larger image.

Once all twelve were printed and fitted, another three hours went into adding the piping detail from my scrap sprue supply and a final overall coat of light flat gray from a rattle can. The star field background is simply a sheet of cardboard cut to size, painted flat black and spatter painted various colors for the stars.

I used stiff wire to suspend the six space craft which I mounted in the trench walls so each ship would mask its wire “hanger”. Aside from “exploding one of the X-Wings due to a successful hit by Darth Vader, I didn't do any painting on any these really very nice models.

Some of you may be wondering about the title of this build. Well, it is a bit of dialogue lifted directly from an earlier part of this sequence when the Rebel bombers were supposed to take out the Death Star's vulnerable exhaust port but failed. The leader of the remaining X-Wing squad, Red Leader, is flying down the trench in a desperate second attempt to take out the port saying, “Almost there! Almost there!” (SPOILER ALERT): Red Leader is blasted into atoms  by Vader, leaving the way for Luke to save the day. 10/4/20 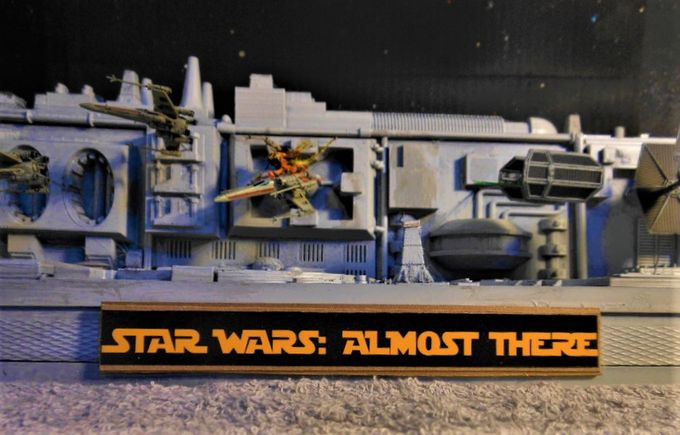