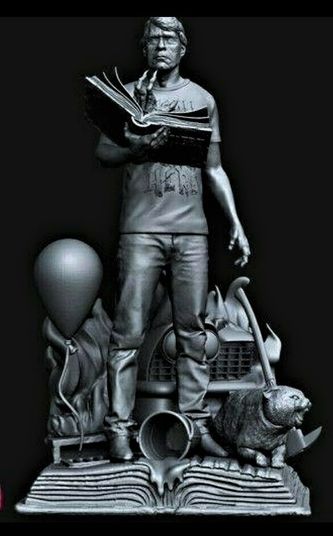 The unpainted version of this kit. It really doesn't look that bad in monotone grey, does it?

I think the first Stephen King story I ever read was “The Mangler” in the 1972 December issue of Cavalier magazine and I have been a fan ever since. Little did I realize at that time that he would become one of the most prolific writers that have ever lived and whose writing style influenced a generation of authors, including yours truly.

This resin kit that I picked up on eBay is an attempt to display some of King's work, most of which is from film adaptations of his work, namely “Christine”, “It”, “The Shining”, “Carrie”, “Pet Sematary”, and “Misery”. Some of the articles on display are tenuous at best such as the blood bucket from “Carrie” and the fire ax from “The Shining”. “Misery” is represented by the book that King is holding with a clawed hand coming out of it (not sure what that is from, maybe “The Dark Half”(?)). The more obvious are a balloon & sewer opening from “It”, the blazing 1958 Plymouth Fury from “Christine” and the hissing cat from “Pet Sematary”. King, wearing jeans and tee shirt, comes with two heads, one with glasses and other without. I elected to go with the one with out spectacles which I will explain later. 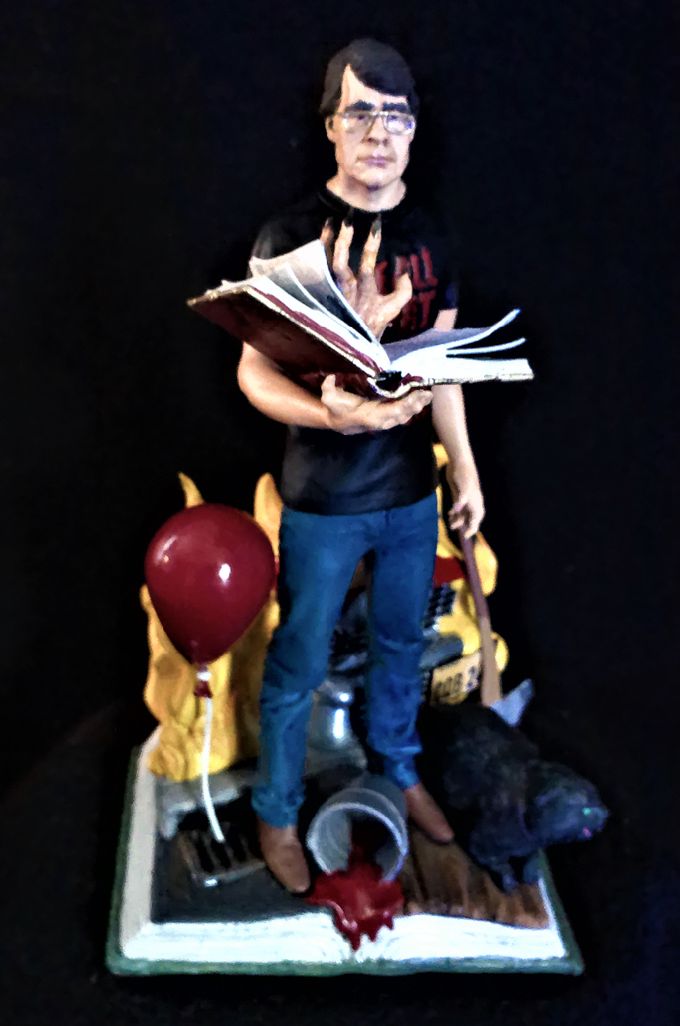 The 3D printed resin model was of average quality at best and had areas of unreacted resin here and there which was extremely annoying. Not only does it impact paint adherence quality but it is also a health hazard to some individuals. Fortunately, I had a UV lamp available which I used to completely cure the parts and washed them with alcohol prior to priming with flat gray paint from a rattle can.

Alas, the overall detail wasn't as good as I expected based on my experience with printing resin figures of my own. I ended up adding a few touches to make the kit look better (to me at least) such as adding grill work to the car's bumper and fabricated wire frame glasses for Mr. King out of brass wire. I found an excerpt from “Misery” which I printed out in the smallest font I could find and glued to to the open pages of the book he is holding. In keeping with the movie motif of the scene, I printed out an albino rat (from “Graveyard Shift) that I perched atop the “Carrie” bucket. I also added a pair of glowing eyes inside the sewer drain of Pennywise laying in wait for its next victim. 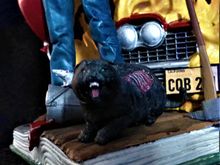 The 'zombie' cat from "Pet Sematary". For the uninitiated, that's "Christine" blazing away in the background 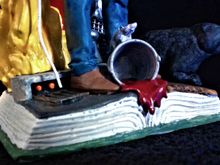 Pennywise peering out from the sewer, looking for new victims. Note the the albino rat resting on the blood bucket. 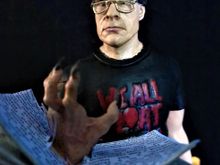 A hand coming out of the book "Misery". I'm not too sure what that is about.

I cheated a little by using my ink jet printer to make the license plate. The lettering on resin version wasn't very crisp so my several attempts at painting them proved to be fruitless. I started to go on the Google machine to see if I could drum up some decals when I thought about using my ink jet printer. I scrolled through the fonts and found one that matched the lettering on the California plate (Bahnschrift Condensed in case you are curious) and, using the highlighting feature my the word processor, I found a yellow that matched the color of the license plate. I had to print a few versions until I zeroed in on the font size but finally made a perfect match. I cut out my license after spraying with a coating of UV protection to prevent its fading over time. I glued it in place with carpenter's glue and gave it a coat of clear gloss paint to seal it.

The rest of the painting was “by the book” although I used the face painting technique by Bernardo Esquivel that I found on YouTube which is very striking in its realism. Here is a video of that process: https://www.youtube.com/watch?v=zWjuwZ0oM9g for the interested. 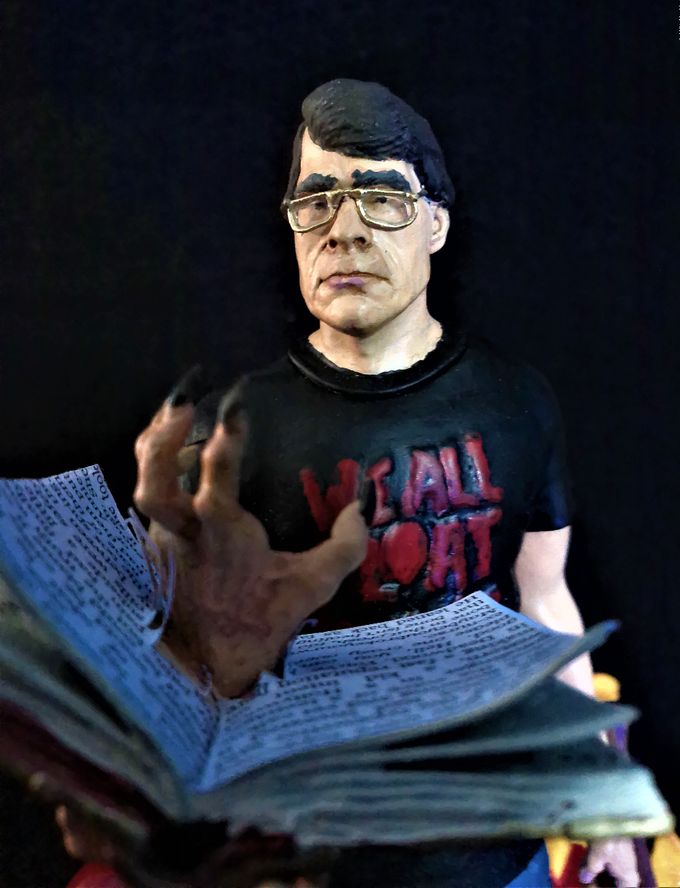 A close up of Mr. King. I'll admit the handmade glasses look a little clunky but they look fine from a normal viewing distance.

The flame effect around the car starts out with a flat white base coat, followed by yellow near the base of the flames and then overlapping orange up to red at the tips. This takes a little practice so trying it out on a piece of paper to get the hang of it is a good idea.

The base is literally an open book with half being the sewer in “It” and the other side a wood floor which could be from any number of King's work. General assembly was pretty standard although I had to grind down a number of the keys to get a better fit on some parts.

I hesitate to promote this kit for reasons that I have already stated. If you have access to a 3D printer, I would suggest purchasing a downloadable file of King to make your own statuette, in either resin or filament with resin providing the best result in overall quality of detail. 4/1/22

You really nailed it, Great job my friend!!